Wheel of Fortune is a British television game show based on the American show of the same name created by Merv Griffin. Contestants compete to solve word puzzles, similar to those used in Hangman, to win cash and prizes. The title refers to the show's giant carnival wheel that contestants spin throughout the course of the game to determine their cash and/or prizes.

The programme aired between 19 July 1988 and 21 December 2001 for ITV. It mostly follows the same general format from the original version of the programme from the United States, with a few minor differences.

Unlike the American version, where the numbers on the wheel correspond to the amount of money won by each contestant, the British version instead referred to these amounts as 'points' – they had no cash value, their only purpose was to determine the grand finalist, or to choose a winner for a particular round. There was a reason for this: between 1960 and 1992, the Independent Broadcasting Authority and for the last two years its successor the Independent Television Commission imposed caps on the top prize game shows could give away per week, and standardising the prize on offer per episode ensured the programme did not breach the set limits.

Points earned from all players carried on to proceeding rounds, and only scores for the current round were susceptible to Bankrupts, meaning a winner could be crowned that never solved a puzzle, but acquired a large number of points. This rule would actually encourage sacrificing a player's turn if he or she did not know the puzzle rather than risking his or her points by spinning again.

If the contestant answered the 50/50 trivia question incorrectly, they would not spin the wheel; play would move on to the next contestant.

In the speed round, the host would spin the wheel with the centre player's arrow determining the point value for each contestant. Vowels were worth nothing, and consonants were worth whatever the value spun. The left player would go first. No more 50/50 questions were asked.

From the fourth series onward, the 50/50 trivia individual questions were dropped. Instead, at the start of each round, the contestants would be asked a general knowledge question and the first contestant to buzz in and answer correctly would gain control of the wheel (this included the speed-up round).

Also from the fourth series onward, from Round 3 to the end, the points on the wheel were worth double (although the wheel did not show the values at double points).

The yellow (centre) player's arrow determined the point value for each consonant in the speed-up round (and during the final spin both Walsh and Leslie employed the catchphrase 'No more spinning, just winning!' while explaining how the speed-up round worked). Vowels were worth nothing, and consonants were worth the value spun. In case of a tie, each player tied for the lead spun the wheel and the player who spun the higher number went through. Live betting basketball strategy.

In the Grand Finale, the winning contestant chose from one of three bonus prizes to play for: a car, a luxury holiday, or a cash prize. The series in 1994 differed, in that the prize the contestant won for solving the puzzle was a car plus the cash prize of £10,000. In one episode in 1994, the prize was two cars and £10,000.[citation needed] From 1995 to 1998, the player chose one of two envelopes, one with the car and the other with £20,000. The prize chosen, the Grand Finale continued with the contestant choosing five consonants and a vowel. The contestant had 15 seconds to solve the puzzle to win the prize. Unlike other versions, the player could solve any one word individually, and then work on any other word in the puzzle. For example, if the puzzle was 'A CUP OF TEA', the player could solve 'OF', then 'A', then 'TEA', and finally 'CUP' to complete the puzzle.

In the final series, 'LOSE A TURN' was changed to 'MISS A TURN', for reasons unknown, and a '500 Gamble' wedge was added. If a player landed on the latter wedge, they had the option of going for 500 points per letter or gambling their round score. If they chose to gamble their points and called a correct letter, their score would be doubled with 1,000 (2,000 starting in the third round) for each appearance of said consonant added to the sum;[clarification needed] an incorrect letter was the same as Bankrupt.

In the rare event two or all three players were tied for first place, the host had each player spin the wheel once, and the highest number spun won the game. Spinning a 'BANKRUPT,' 'LOSE A TURN/MISS A TURN,' or 'FREE SPIN' did not allow another spin and thus counted as a zero score.

Unlike the original American version, instead of cash prizes, successful spinners from each round were rewarded with a choice of three prizes which might contain household appliances, a holiday, etc. In 1988 the prizes for the final were a trip (an oriental furnished living room on 6 September and a luxury bathroom on 13 September), a new car (or sometimes a new boat), or a cash jackpot at £3,000 (£2,000 on the last two episodes of the first series). In 1989, the cash value increased to £4,000, from 1993 the Cash value increased again to £5,000. On the celebrity specials, solving the final puzzle donated £5,000 to the celebrity's favourite charity. During the 1994 series, solving the final puzzle won both £10,000 and a new car. In some episodes in 1994 this was increased to two cars and £10,000. The prize was later increased to £20,000 or a car from 1995–1998, with the winning contestant randomly selecting his/her prize by choosing one of two sealed envelopes.

During the daytime series, winners of each round were able to chosen from an array prizes laid out in the studio, such as a CD player, dishwasher etc. The cash prize for the final puzzle was dropped to £2,000. Players also could pick the same prize more than once, and on some occasions contestants made requests for an opponent who had won nothing to pick a prize, and Leslie always upheld the request.

All contestants in all series, win or lose, went home with a Wheel of Fortune watch (and sometimes other Wheel-related merchandise).

In the final, the winning contestant had a free choice of five consonants and one vowel in order to help them identify the answer within 15 seconds to the puzzle and win the prize.

The original design of the wheel was based on the American design, placed above ground on top of layers with lights. From 1994 to the end, the wheel was placed on the ground.

One notable outtake from the show involved a man who spun the wheel in the wrong direction, forcing the show to be postponed until the next day. As the British wheel has a gearing mechanism to regulate its speed, this action promptly broke said gears, and the studio technicians spent hours trying to fix it.[2]

In 2001, Lose A Turn was renamed Miss A Turn and a 500 Gamble space was added. When 500 Gamble was landed on, the player had a choice of going for the regular 500 points or gambling their round score on a correct letter. If the contestant chose to gamble, each appearance of a correct letter increased their score by 1,000 points plus their current score while an incorrect letter took away all the points they accumulated in the round.

The two Hogmanay Specials were only broadcast to the Scottish and Grampian Television regions.[3]

For the first ten series, the show was broadcast once a week in a primetime slot. With series 8, a number of regional ITV stations did broadcast episodes a few days later including the last episode on 31 December 1996.

During the eleventh series, the programme was moved to a five-shows-a-week daytime slot and it aired at 2.40pm each afternoon from 2 March, after the sixth series of Dale's Supermarket Sweep concluded its run. It took a break from 28 May to 10 September 1999.

The twelfth series began at the start of the year, and lasted until the start of December. During this series, the show's slot varied in different ITV regions.

Additional episodes were broadcast by all ITV regions on Sundays during May.

During the thirteenth series, most ITV regions broadcast episodes at 5.30pm from 2 January to 22 June 2001, except for Meridian, Yorkshire, Tyne Tees, before being switched to a Saturday afternoon slot until 4 August 2001. The final thirty episodes (series fourteen) were networked at 2.40pm, from 12 November to 21 December.

One of the most successful game shows ever made, Wheel of Fortune is a very popular TV program that catapulted Vanna White to stardom as one of the most recognizable TV celebrities.

For those who has never seen the show, WOF is a language game that requires both luck and skill. The object is to solve a 'hangman'-like mystery puzzle. Three contestants compete, taking turns spinning a huge wheel divided into sections containing various dollar amounts, as well as spaces such as 'BANKRUPT', 'LOSE A TURN' and 'FREE SPIN'. If a contestant span a dollar amount, he/she could then guess a consonant to receive that dollar amount for every time that consonant appears in the puzzle. An incorrect guess or spinning the wheel to one of the penalty spaces means control goes to the next contestant. At any time during a player's turn, they can elect to spin the wheel; ask to 'buy a vowel' of their choice, in which case $250 is deducted from their score; or solve the puzzle. The player with the most winnings at the end of the show is pronounced the champion and gets to play a bonus puzzle, which he/she had 15 seconds to solve after guessing five consonants and one vowel to be uncovered.

Softie, which later became GameTek, obtained an exclusive license to produce computer version of this popular gameshow, on the heels of getting a Jeopardy! license. The game milked the license relentlessly, releasing approximately one WOF PC game each year between 1987 and 1994. New features were added as technologies advanced, from CGA to VGA and digitized voices of Vanna White in the 1991 Deluxe Edition. Each new version features more questions than the last, although they disappointingly border on the easy side and tend to be from only a few categories (e.g. people's names, common nouns).

Still, fans of the TV show will definitely enjoy these computer releases which are quite faithful to the originals. Don't expect a tough challenge, but do expect Vanna White's characteristic smile and flipping of white cards :)

For those having issues, this is for windows 3.x. I suggest running Win 3.x in dosbox or something and THEN running the game in that.

from television city in hollywood

This game isn't working.. I ran the Wheel EXE in DosBox and it said that it must be run in 'Microsoft Windows', or something along those lines.

Run it in Dosbox.

i cant get it to work with my vista, i wish it did though

Share your gamer memories, help others to run the game or comment anything you'd like. If you have trouble to run Wheel of Fortune Deluxe (Windows 3.x), read the abandonware guide first!

We may have multiple downloads for few games when different versions are available. Also, we try to upload manuals and extra documentations when possible. If the manual is missing and you own the original manual, please contact us! 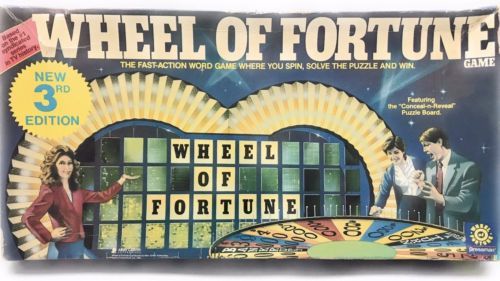