Tilly runs like a poker GODDESS, incredible cards! A $25/$50 Poker Night in America cash game found Jennifer Tilly seated at the table wearing what has arguably become a signature look for her while playing poker - a low-cut top that reveals a fair amount of her ample assets. A professional poker player, Hollywood actress, and voice talent, Tilly brings her acting chops to the poker table. Not many people can bluff the way a professional actress can. Tilly is no poker debutante, either. With decades of experience under her belt, this triple threat has shared pots with both poker and Hollywood greats. Jennifer Tilly is not only an American-Canadian actress but also an award-winning professional poker player. She is best known for playing Olive Neal on Bullets over Broadway, for which she also got nominated for an Academy Award for Best Supporting Actress. Tilly also won the World Series of Poker Ladies’ Event.

Jennifer Tilly has always been an entertaining TV figure, and contrary to what many people know of her, she has been a gambler and an avid poker player for a long time. It wasn’t her boyfriend, Phil Laak, who taught her the game; she actually learned to play poker early in her acting career. Her father was a passionate poker player while her grandmother and uncle used to play tournament bridge. In her youth, she played a lot of card games with her mother and stepfather.

Tilly got into poker somewhere in the late 80s. She was married to Sam Simon - The Simpsons producer - who was also passionate about the game. In 1989, the young actress got a role in a gambling comedy called ‘Let It Ride.’ From there on, she played more and more during scene breaks with her fellow actors and in home games. Jennifer met ‘The Unabomber’ Laak 14 years later, in 2003, during a WPT tournament. Laak introduced her to the high-stakes world and the rest is history.

Was it a wise decision to let her ride the poker swings? The answers are mixed, but what we can say for a fact is that Jennifer Tilly provides the poker world with some unforgettable moments and quotes. And we have the rest of the article to prove it.

After the actress had her ‘15 minutes of fame' on the green felt in 2005, winning the WSOP Ladies No Limit Hold’Em event and the WPT Ladies Invitational Tournament, her poker career went downhill. She tried to quit several times, most notably in 2008 and 2011. Of course, we all know she didn’t succeed as she was one of the highlights in this year’s WSOP Event 32: $5,000 No Limit Hold’Em Six-Handed exiting fairly close to the final table bubble (14th). But she tried writing a column in 2008 for Bluff Magazine and made quite a comparison:

I love poker but greatness in poker is an elusive dream. There are too many variants. Trying to find validation in poker is like trying to find a virgin in a whorehouse. I’m not giving up poker entirely – gambling is an addiction after all. I’m just going to treat it more like a hobby and less like a career.'

She must have dug herself into a hole to have written such a thing. Luckily for us all, she changed his mind and continued to amaze the poker community with her uncanny reading skills and her broad cleavage..which leads us to the next quote. 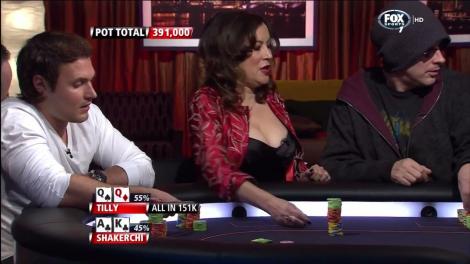 Whenever she is in front of a camera, Jen likes to show off her.. God-given advantages. That certainly makes sense when she is at a poker table playing with men. She even admitted she can’t help it, it’s the starlet in her that makes her wear push-up bras and low-cut tops. However, she DID realize that none of her wardrobe makes a difference when she plays REAL poker against professionals. Jen said during a nymag.com interview:

The thing is, if people are ­really playing poker, they don’t care. Nothing looks better to them than a pair of aces. They’re not looking at your..pair. They’re looking at their pair.'

Money Is Money, the Simpsons Edition

Besides her famous part-time Family Guy voice over - she voices the Griffin’s neighbor, Bonnie Swanson from time to time - Jennifer Tilly also guest stars in the famous TV show ‘The Simpsons.’ In Season 24, Episode 4, she played sparingly as, well.. herself, the Bride of Chucky and a poker player. She basically popped up from a screen and tried to give Lisa a quick lesson about playing the game. Of course, Chucky was there hurrying Jennifer to get back on the stage to film ‘Bride of Chucky V.’ ‘Time is money,’ the groom said. ‘Money is money,’ the bride reacted giving Lisa a glimpse of her flawless logic. You can watch the scene below:

Taking a WSOP Bracelet Over an Oscar

Nobody doubts that 'The Unabombshell' - Tilly’s nickname given after she became Laak’s girlfriend - loves the game of poker, but we also have to take into consideration her love for the bright lights. Since poker gave her a lot of fame besides maybe some money it’s easy to imagine that the actress doesn’t actually miss the stage that much. She now has a stage of her own that gives her a whole different set of thrills. But how about the accolades? Does an Oscar have more value than a WSOP bracelet? 'Not exactly,' Jennifer said in a CalvinAyre.com interview a couple of months ago. 'n fact, if she were to choose between a WSOP Main Event bracelet and a honorary Oscar, she claims she would choose the gold bracelet. Other than that, she would choose an Oscar just because of the stats. Less Oscars are given away on a year to year basis than regular WSOP bracelets.

Can’t argue with that.

I Thought You Had Pocket Kings

In probably the biggest blowup TV poker has ever seen, Jennifer Tilly made a fool of herself. In one of the many hands of Poker After Dark’s inaugural season, the actress/poker pro had pocket Jacks on the button. She obviously raised and Patrik Antonius from the small blind decided to defend. The flop hit Tilly hard for a set while Antonius had a second pair. She bet and Antonius called. Nothing out of the ordinary yet. The turn and river brought kings on the board and that’s when Tilly decided to play it safe. Yes, she checked down her set AND made full house on the river. Why? She said to Antonius after the showdown:

‘The Unabombshell’ later admitted she was nervous playing with such big household names and defended her play by saying that the pocket Jacks hand was part of a Sit’N’Go Winner-Takes-All tournament and it was too early to take chances. She also said that the ‘I thought you had pocket Kings’ stuff was just a joke; she never thought it that way.

By the look of his face, Ivey couldn't believe it.

Not counting that mistake and looking in retrospect, can we say Jennifer Tilly was more successful at playing poker than playing a role? The actress did provide with an answer early this year. She told PokerWomenNews:

I’m obviously a better actress than poker player. But poker, as everyone knows, is incredibly seductive. Right now I think of myself as predominantly an actress. But I am lucky I can do both.'

This is not quite a trick question; besides some bad plays, Tilly showed several times that she can actually make good decisions on the green felt. Just look at how she plays her hand versus the online wizkid Sam Trickett:

Overall, in her live poker tournament career, she won $916,276 according to HendonMob DB which is actually not a bad number. Not good enough to compare it with her acting success (15 acting awards) but still something to take into consideration.

And how about finishing this article off with a Phil Laak quote? We already mentioned that the two met in 2003 during a WPT event. Jennifer wanted to hang out with real poker pros and asked Phil for his number. Of course, she never called, claiming that she lost the number. When they meet several months later, Laak tried a different more-aggressive approach. He told her:

Instead of me giving you my number and having it be, what, 3% that you'll call me, why don't you give me your number and then it's 100% I'll call you?'

Sounds just about right to place a bet, no? GG Phil!

Jennifer Tilly, the poker player had made many people curious. She is not only gorgeous. but she is also hot and sexy for a woman in her age. Jennifer Tilly is 56 years old now. That’s why in some forums, Jennifer Tilly Plastic Surgery ad become a warm thread. Did she go under the knife to enhance her look? this case didn’t only interest many people and the actress’ fans. But it made some plastic surgeons tried to make some speculations.

You must have already known that many women love having big breasts. It is even said as a symbol of sexiness. Jennifer Tilly might think the same. He breast looked so perfectly round and big as always. Dr. John Di Saia commented that he noticed the perfect breasts as the result of a boob job.

Jennifer actually got big boobs since she was younger. But her current tight breast just made the speculation true. Jennifer Tilly also love wearing sexy outfit that showed off her sexiness.

Beside the perfect breasts, her youthful look also made the people believed that she got some things done on her face too.If you see her current appearance, Jennifer looked having tight facial skin without any wrinkles or sagging skin. The people assumed that it was the effect of cosmetic surgery, she might get botox injection regularly and some filler as well. Talking about her smooth look, Dr Jennifer Walden stated that she might get botox to keep her face fresh. However, Dr. Walden also added that it might also be the positive effect of her good lifestyle. If she avoided alcohol and took care of her skin well, it could gracefully young.

Moreover, her fresh eyes might be the effect of eyelid surgey (blepharoplasty).

To be honest, Jennifer Tilly’s appearance looked so attractive. We believe that many men admired her so much. The dog house slot casino. Withor without surgery, her appearance can hypnothize our eyes.