Real Money Pai Gow Poker Has Great Payouts! Pai Gow Poker is one of the hottest games online at the moment and there are many reasons why. Firstly, the rules are easy to figure out. Secondly, the strategies and intensity of the game can keep you piqued for hours at a time.

Pai Gow Poker is an attempt to take a traditional Chinese game and make it more appealing to a wider range of casino gamblers. In the traditional pai gow game, players use domino tiles in order to make hands, with the winning and losing hands being largely a matter of tradition rather than following an order that would be logical to someone who wasn’t familiar with the game.

Pai Gow Poker solves this issue by using a standard deck of playing cards and regular poker hand ranks that will be more familiar to most gamblers. At the same time, the game retains the unique style of play that originally made pai gow such a popular gambling game in China. If you’ve been looking for a game that can be played at a relaxed pace and generally won’t cost you a lot of money even when luck isn’t on your side, online Pai Gow Poker might be a game you’ll enjoy.

Most Pai Gow Poker games operate under similar rules and the same standard payouts. The main difference between casinos will be in the “house way” rules dealers are forced to use. These rules will only have minor variations between them, though, and will have only the smallest of impacts on the size of the casino’s edge (some are slightly closer to truly optimal play than others).

A hand of Pai Gow Poker begins with the player making a wager. Both the player and the dealer will then receive seven cards at random from a 53-card deck – a standard 52-card poker deck with the addition of a single joker.

• Most casinos treat A2345 as the second-best straight, trailing only AKQJT.

• A joker can only be used to complete a straight, flush, or a straight flush. Otherwise, it counts as an ace (including being paired with any other aces in your hand).

The rules governing the two-card hand are also fairly simple. A pair is the strongest hand possible (with a pair of aces being the very best two-card hand), with all pairs beating all unpaired hands.

After the players have set their hands, the dealer will take their turn to set their cards. The dealer must used a predetermined set of rules known as the “house way” in order to make their two hands.

Once this is done, the player and dealer hands are compared to one another. The five-card hands are directly compared to each other, as are the two-card hands. If the dealer beats the player on both hands, the player loses their bet. If both player hands beat the respective dealer hands, the player wins even money on their bet, minus a 5% commission, meaning that a $100 bet will win $95. Should the dealer and player each win one hand, the bet is considered a push. It is also worth noting that in comparisons of individual hands, ties (known as copies) are considered wins for the dealer.

In live Pai Gow Poker, players may have the opportunity to play the banker, taking bets from their fellow players and attempting to win by using the house way method. However, this option is not normally available in online Pai Gow Poker, where the game is almost always played as a one-on-one confrontation between the player and the dealer.

Pai Gow Poker strategy is rather complex – in fact, it’s probably impossible to come up with a simplified system that would actually allow players to make the optimal decision every single time. Luckily enough, though, the casinos have provided players with a method that is reasonably close to optimal: the same house way system they instruct their players to use!

Demo play eye of horus. In most online Pai Gow Poker games, you’ll have the option of immediately triggering the house way through the use of a “house way button” provided in the interface. This is a quick and easy method for playing your hands well, and is the recommended way for beginners to start playing the game.

If both the player and the dealer use the same house way method of making their hands, the house edge should be somewhere around 2.73%. Of course, under this method, the player and dealer would seem to have the same chance of winning each hand, since they’re getting the same cards and following the same rules. However, the casino has two advantages: the 5% commission on winning hands, and the fact that identical hands are considered wins for the dealer. If the player were to play a perfectly optimal strategy, they might be able to shave another 0.1% or so off of this edge, but again, it is impractical to memorize every possible combination of cards you might hold.

If you are interested in seeing what a house way looks like, the rules from the Flamingo Casino in Las Vegas are below. These rules are used at many online casinos as well, meaning you’re likely to see a dealer follow these rules at some point in your online Pai Gow Poker career. To use these rules, simply find the best description of your seven-card hand and follow the rules there to determine how to set your cards. We’d also like to give credit to Wizard of Odds, who posted these rules (along with several other house ways) on their website.

No pair: Place the second and third highest cards in the front.

One pair: Place the pair in back and the two highest other cards in the front. Two pair: Split the two pair, except in the following situations:

Three of a kind twice: Play the higher pair in front.

Straights and flushes: Always play a straight or flush in the back hand, except play as two pair if you hold one of the following:

Full house: Split, unless you have a pair of twos and an ace/king can be played in front.

Full house with three of a kind and two pairs: Play the highest pair in front.

2 through 6: Always keep together.

7 through 10: Split unless an ace and a face card or better can be played in front.

Jack through King: Split unless hand also contains a pair of tens or higher.

Aces: Split unless a pair of sevens or higher can be played in front.

Straight Flush: Play the straight flush in back, except play as a two pair with: 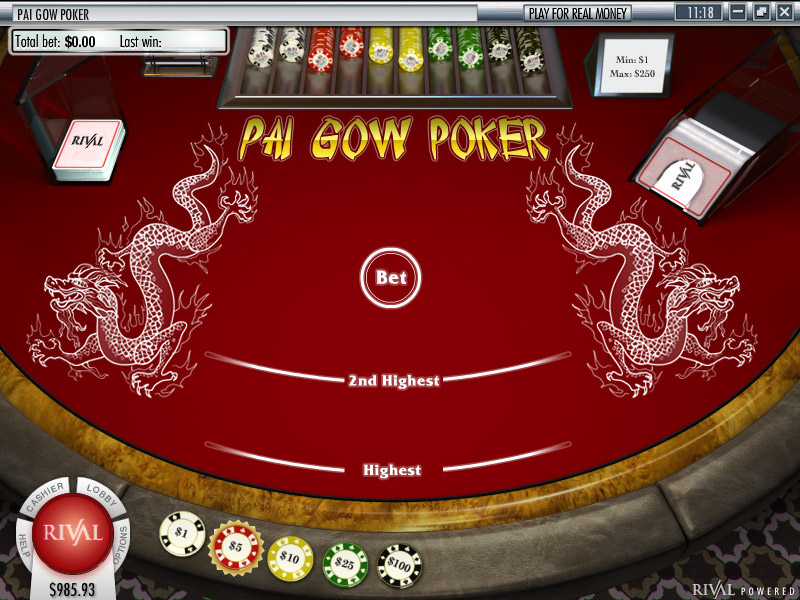 Play a straight or flush instead of an ace and a face card or a pair can be played in front.

Royal Flush: Play the royal flush in back, except play as a two pair with:

• Aces and any other pair.
• Both pairs tens or higher.

Break up royal flush if a straight or flush can be played in back and a king or better in front.

Five aces: Split unless a pair of kings can be played in front.