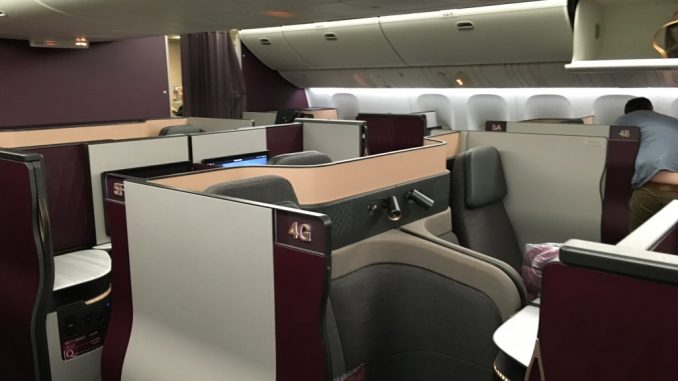 This post contains references to products from one or more of our advertisers. We may receive compensation when you click on links to those products. Terms apply to the offers listed on this page. For an explanation of our Advertising Policy, visit this page.

Editor’s note: This story has been updated with new information. It was originally published on 10 July 2019.

Many of Qatars fleet of 777-300ER and 777-200LR have been fitted, but check seat maps and ask if you want to try it, which flights it is available on, because it is definitely worth it; better than many First Class products. Essentially Qsuite.

TPG considers Qatar Airways’ amazing Qsuite product to be the world’s best business class. If you are redeeming points or miles, there is really no better product in its class to book and fly.

Related:Approaching perfection: A review of Qatar Airways’ Qsuite business class on the 777-300ER, Doha to JFK

Qatar is about halfway through its lengthy process of equipping its wide-body aircraft with Qsuite. The airline has a huge fleet of more than 200 planes, so this is a long and complicated process, as it cannot take significant amounts of aircraft out of service at once. Some aircraft, like its Airbus A350-1000s, all have Qsuite installed, as these were all newly delivered after the product was released. Online crash gambling. The airline has announced that its Airbus A380s will not be fitted with the product, as it plans to retire these aircraft.

It can be confusing to determine which routes from the United Kingdom to Qatar’s global hub in Doha (DOH) have Qsuite and which do not. As a general rule, here is the status of various aircraft type Qatar operates on long-haul services:

Do remember these routes and planes are always subject to last-minute, unforeseen aircraft swaps for a number of reasons. This is certainly frustrating but common in the airline industry.

Related:Amazing deal alert: Oslo to Asia in business class from £1,193 with Qatar

Noting that caveat, as of February 2020, here is the status of Qatar’s U.K. routes:

Qsuite can be booked with Qatar Airways’ own Qmiles or with partner airline miles such as Avios or American Airlines AAdvantage miles.

With the new BA partner award chart, one-way flights in business class with Qatar Airways from the UK to Doha (DOH) cost 62,000 Avios.

Editorial Disclaimer: Opinions expressed here are the author’s alone, not those of any bank, credit card issuer, airlines or hotel chain, and have not been reviewed, approved or otherwise endorsed by any of these entities.

I previously posted this review against the 777-300 ER seat plan as there was no Q-suite seat plan for 777-300 ER last year. I flew Business Class on 2 December 2018 from Sydney to Doha and deliberately booked on the 777-300 ER, not my normal choice of aircraft, as I prefer the A380 for long haul, but I was desperate to try the Qsuite, which is yet to be fitted to the A380. Many of Qatars fleet of 777-300ER and 777-200LR have been fitted, but check seat maps and ask if you want to try it, which flights it is available on, because it is definitely worth it; better than many First Class products.
Essentially Qsuite has a 1 - 2 - 1 configuration with 48 suites in Business Class. Suites alternate between forward and rear facing. Rows 1-6 are ahead of the front exit and rows 7 to 11 are behind the second entrance/exit door, so if you are in 1-6 you board separately and dont get disturbed, in 1-11 you still board first but then have all economy boarding through the door ahead of you and coming past. Until take off your sliding door to the suite is locked in the open position. I was in 11B which is a window, left hand side, forward facing and last row before economy class curtain divider. First the pod or suite itself. Simply outstanding, it really is like your own small room with ample bench space, large fold out table with several adjustments. One thing they got right now is the seat pitch, old business you always sat too high and slightly reclined which felt awkward and lifted your feet off the ground, this is flat and straight backed now. One thing I really liked now, is the seat doesn't have a leg extender anymore that raises you feet off the ground, instead the seat slides forward or backward to bring your legs closer to the feet rest. The leg extender always left your legs at an odd angle and still hanging down so no good for DVT on long flights. One thing I wont say I disliked but was a bit annoying, the main storage bin to the left under a cushion is well tucked away but a bit fiddly trying to get the lid open and closed. Then if you have stuff on top of the cushion and want to get into the bin, you have to move it all and the lid gets caught on the seat belt unless you lift it out of the way. But aside from that very comfortable and like a little oasis, especially with the sliding door that fully seals you in.
The seat position itself in 11B, great view of the engine and wing leading edge and despite being near the economy divider curtain, it was ok, didn't notice anything. If you are one of these people though who really prefers no disturbance of curtain being drawn and closed or a family maybe behind you in economy with a young child, then get a seat further forward. The Qsuite though is outstanding and so much better than the old business pods which were still a great product, but now you sit lower and are enclosed and feel very private as you dont see everyone else now, the old seats you sat up very high and could see everyone. I only marked entertainment down slightly as the World Map on this flight was a version with less control than normal. 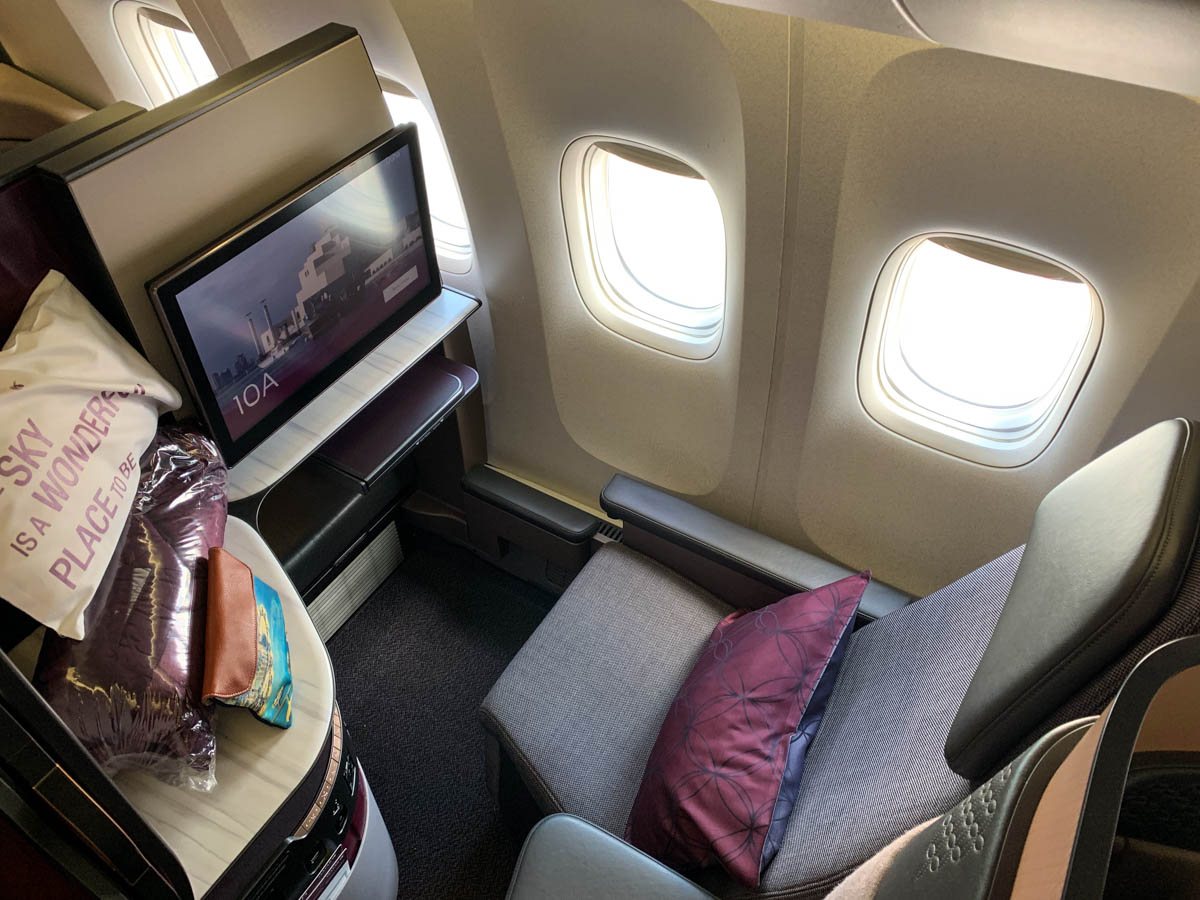 Service as always impeccable on Qatar and staff exceptional in Business, but that has always been my experience in economy as well with them. I forgot the stewards name serving my section of about 6 people, but he was from Serbia had been with them 2 years, so if you read this, big thanks to you, your manner and service was above and beyond.