Britain's contribution to discovering dinosaurs will be marked with a range of commemorative 50p coins Three different dinosaurs will be featured on the coins, the fossils of which led British anatomist, Sir Richard Owen, to coin the term 'Dinosauria' in a paper in 1842. Hylaeosaurus 50p Coins The Hylaeosaurus 50p coin was released by The Royal Mint on the 1st June 2020. This coin is part of a three-coin dinosaur set released from The Royal Mint on Thursday 13th February 2020. The Megalosaurus 50p was the first coin released in February 2020, followed by the Iguanodon 50p, released in March 2020.

The Megalosaurus 50p is the first of three new 2020 coins released to mark the discovery of dinosaur bones in the UK by Buckland and Mantell from 1824 to 1833. The design shows a Megalosaurus dinosaur with the text MEGALOSAURUS and and BUCKLAND 1824. The fifty pence piece is struck to Brilliant Uncirculated quality and displayed in The Royal Mint's official presentation folder.

The Royal Mint has produced a colour printed Brilliant Uncirculated coin for the first time - the Megalosaurus 2020 50p BU Colour Coin is available direct from The Royal Mint for £20.

The three new coins feature the Megalosaurus, Iguanodon and Hylaeosaurus, respectively, with the designs said to be 'scientifically accurate illustrations'.

A coloured Brilliant Uncirculated coin featuring augmented reality technology is available exclusively from The Royal Mint, whilst The Royal Mint Experience in South Wales is offering visitors the opportunity to strike their own Megalosaurus Brilliant Uncirculated 50p coin and a range of dinosaur themed activities are taking place at the visitor attraction across February half-term. 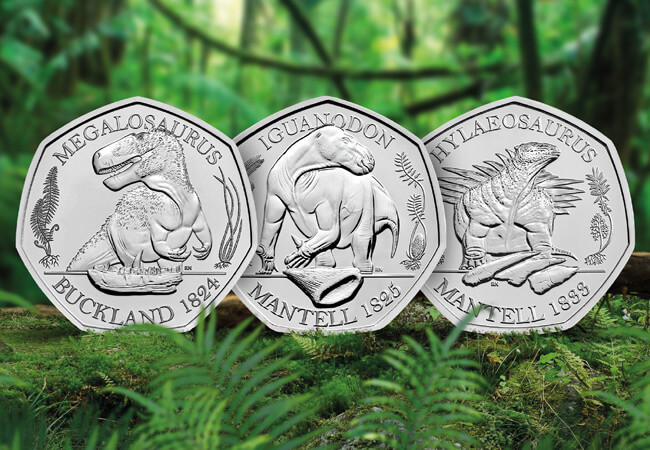 ‘We are delighted to see dinosaurs on commemorative coins and work alongside The Royal Mint. The story of the discovery of dinosaurs is fascinating and particularly relevant for the Natural History Museum since Sir Richard Owen, who coined the term dinosaur, was also our founder. The Dinosauria collection brings this story to life for modern day dinosaur enthusiasts everywhere.’